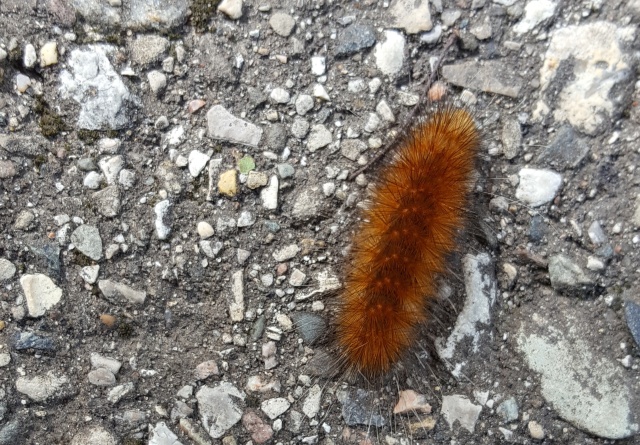 You know Mother Nature is at work when you go to place your foot on the trail and there, poised unwittingly directly in the path of your oncoming sole, you find a Woolly Bear caterpillar inching its way along.

The Woolly Bear caterpillar is the larval stage of the Isabella Tiger Moth. It’s not an uncommon sight as autumn comes on. The caterpillar is on a mission.

The Woolly Bears are out and about this time of year for the same reason so many creatures in Michigan begin to get a move on. The caterpillars are locating their overwintering spot, likely in the shelter of leaves, rocks, or wood.

My first Woolly Bear of the season took me by surprise by sporting an entirely rust-colored coat. I’m accustomed to seeing them banded at each end with black.

There’s lore about the coloration of these little dudes. The more ‘rust’ coloration they have, the milder the winter will be – so goes the thought. If that’s the case, this little Woolly Bear I chanced upon suggests a mild winter indeed.

Folklore aside, the solid rust coloration is actually the result of multiple moltings. According to Peterson Field Guides Eastern Moths by Charles V. Covell, Jr.:

Colors change as caterpillars molt to successive instars, becoming less black and more reddish as they age.  Thus differences in color merely reflect age difference among larvae as they prepare to overwinter and are not a reliable indicator of the severity of the winter to come.

It’s pretty amazing when you think about it that these little guys will find their spot and manage to weather a Michigan winter.

Then, come spring, they’ll spin their cocoon. Ultimately, voila, we have the Isabella Tiger Moth for a brief soujourn.

Who needs football or Netflix when you have this kind of magic around to observe?

2 thoughts on “Woolly Bear on the move”