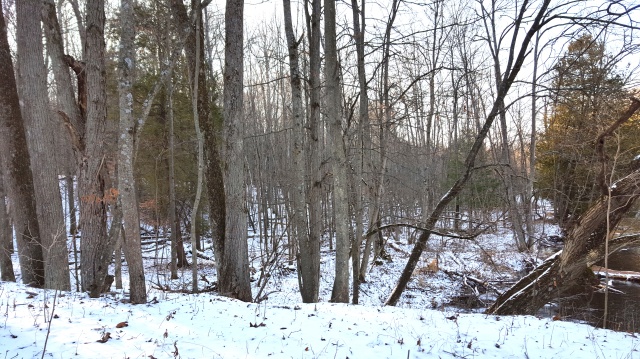 New Year’s Eve day we had reports of a snowstorm moving in. So, that morning, I am happy to say that I did get out and on the move, hoping to beat the storm. During the first mile, I began to feel the cold pings of sleet, but forged on. It picked up, but never got overwhelming. It turned out to be a great, invigorating run.

The snow didn’t materialize according to schedule. First, there was the long, steady sleet, and eventually it was rain. At a couple of points, it was actually raining pretty hard, with puddles and all. It wasn’t until late in the evening when the rain finally turned to snow. That, of course, meant ice.

I had originally planned to participate in an organized hike on New Year’s morning, one of those First Day Hikes, at a place I had never before visited.  When morning actually arrived, however, it was pretty clear the roads were really too treacherous to get to the starting point.

Nevertheless, I still made myself venture out on foot. It was a tentative, careful exploration. It was indeed very icy everywhere.

I slowly headed for one of my familiar routes nearby and I just walked, rather mincingly. I knew running was out of the question, but I carefully and gradually picked up a little speed. Most of the time, I crunched my way through the grass since the sidewalks and the roads were really not safe.

I crossed paths with a couple of teens who were delighted to discover just how slippery it was out. They weren’t making much headway, and one took a tumble, but they were getting a good laugh out of it.

All in all, I covered about five miles, albeit with much retracing of steps – happily meditative. I noticed my own footprints as I came upon them, and felt that apparently I actually had made my mark, if ephemeral, on the world.

My New Year’s outing wasn’t fast, but it was good. It made a cheerful compromise, in keeping with my plans for the new year. Staying in motion is so important for my physical and mental/emotional health.

Yes. I am one of those people who believes in making New Year’s Resolutions – really, positive resolutions of any kind at any time. Running, among other things, has taught me in a very practical way the importance of goal setting. It’s a very good thing to have a calendar with your upcoming expectations on it – the miles you’ll cover, the core workouts, the race you’ll run. Then, you know what you have to do in a day to get to your goal, and the satisfaction of checking things off. Ultimately, you have your accomplishment in hand. Then, of course, you set a new goal. And it all feels very good.

So it is in other areas of life. And there are a number of important areas in my life that desperately need attention, certainly some goals are worthy here. In fact, I have been flying in the clouds for quite some time, and I need to pop out where the sun is shining. I must.

Today is my prelude to that new year of goals and their pursuit. I will attempt to blog the journey, because art, writing – really, creativity of all flavors – is part of that path.  Hence, I give you Verulomar – my little land of exploration and selfhood discoveries.

The name is just a reminder to me of the big points on the path. They include …..

So, yes, I will be good to myself this year with:

And I am setting some very practical smaller goals to make sure I reach the big ones. Because part of the problem with flying aimlessly around in the clouds is that it is so hard to make yourself pull back on the controls and aim higher. For. Whatever. Reason. (wink)